In today’s post, we have the pleasure to introduce you to Physio R&D/Optimov’s founder and CEO – José Cerdan. This post is part 1 out of 3. More specifically, we are going to talk about José’s long journey as a physiotherapist. We will also share how he got into working with chronically ill patients, as well as his skills outside of healthcare. The forthcoming posts will cover how the idea about Optimov was born and José’s healthy lifestyle tips.

José finished his studies in Physiotherapy in Sweden back in 2001 and has been working as physiotherapist ever since. Continuously seeking novelty and innovation, he has been, so far, working in Spain, France, Sweden, Norway and Denmark. Getting to know new cultures enabled him to be more emphatic and compassionate towards his patients, making him a trusted and valued healthcare provider.

After getting his bachelor degree, he made a study based on a specific diagnosis from rheumatism called Morbus Bechterew, also known as Ankylosing Spondylitis. This is a type of arthritis in which there is long lasting inflammation of the joints of the spine. Additionally, José has extensive experience from treating Scandinavian patients. The latter go for rehabilitation to Spain to reinforce their physical activity with a specialized treatment, as well as for the good weather and food. However, these are not the only physiotherapy areas he is specialized in.

José finished his master’s degree in physiotherapy in Sweden. He based his master thesis on the rehabilitation after anterior cruciate ligament reconstruction* on first & second division French football, handball and rugby players at CERS. “It took around two years to finish my master’s degree, because I was supposed to have a lot of experience at the same time that did a research in a specific area. To make it even more challenging I chose to do part of it in France, provided that I wasn’t even able to speak French at the time. So, I had to learn to talk French (I cannot so much anymore) and it was really challenging back then”.

Eager to get practical experience after graduating, José tried working within different areas of physiotherapy: “When you finish as a physiotherapist, normally, you know a lot about everything, but you don’t have enough experience. So, you’re very interested to learn about any kind of treatments. I’ve been treating Scandinavian chronically ill patients to improve their quality of life with intensive rehab treatment at Reuma-sol Center and Centro Asistencial Noruego Altea in Spain, but also at Skolgi Rehab Center in Lillehammer, Norway. Also all kind of patients with musculoskeletal disorders in the ambulatory health center of the island of Tjörn in Sweden and Clinica Gran Alacant in Spain.

I’ve been also doing rehabilitation after stroke at Högsbo Hospital in Sweden and  Rehabiliteringscenter Vanløse/Brønshøj/Husum in Denmark, as well as taking care of palliative and home health care patients at the District of Högsbo in Göteborg in Sweden  and in the elderly home Østervang, Frederiksberg in Denmark. I have also been working with athletes, who were rehabilitated after anterior cruciate reconstruction at CERS. To finish, I have been working with Industrial physiotherapy at Falck Healthcare, and then at the hospital level at Frederiksberg and Hvidovre hospitals here in Denmark… I think it has been a long journey as a physiotherapist”.

Telerehabilitation for Chronic Patients – a PhD in the Making

José’s constant drive for self development has brought him to yet another area of physiotherapy related to chronic pulmonary patients. For the past couple of years, he has been treating cardio-vascular patients in both Aarhus University hospital and Hvidovre hospital in Denmark. “In Hvidovre hospital, I created a tool for informing chronic patients about things they should do. We created a website called patientpjecen.dk, it translates as ’ the patient pamphlet’”.

Currently, José is working on his PhD in Århus University hospital. His study includes treating and following the progress of COPD (Chronic Obstructive Pulmonary Disease) and IPF (Idiopathic Pulmonary Fibrosis) patients who use telerehabilitation with Optimov.

As mentioned in the beginning, José’s curiosity goes beyond the limits of healthcare – he has a Master’s degree in E-business based mostly on technology. This is also partly how he got inspired to create the e-health tools, like patientpjecen.dk and Optimov.  Stay tuned for part two of the story about José, where we will share how he got the idea about Optimov and talk about the ongoing journey of shaping the tool as we know it know.

If you are interested in Optimov, you can read more about it’s features here.

*Surgical tissue graft replacement of the anterior cruciate ligament, located in the knee, to restore its function after an injury

Categories: This Is Us

It’s a common opinion that the concept of Optimov is very special and unusual. We are often asked how the idea was born. The only person that can tell the full story is our founder, Read more… 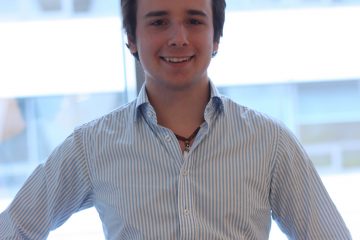 Developers myths.. or reality? Breaking news: ‘All the myths about coding and developers are true, so there are basically no myths’ :D. Yes, spending the majority of their time in front of the screen, drinking Read more…